When Rebekah decided on a whim to go to a church on the invitation of someone she had just met, she never thought her impact would reach to countries beyond Germany.

A month off the plane, not even fully moved into an apartment yet, knowing only how to say “my name is” in German…how meaningful could meeting new people at an event in a city one barely knows? Well, more than you think. Rebekah heard about a gathering hosted by the Mosaik Student Network, a campus ministry group that seeks to bring together international students in Frankfurt through joint actions, exposure to new cultures, and community celebration. They create events one or two times per month and invite students from all the different university-level schools in Frankfurt. Rebekah thought it would be a good way to get out and meet new people, put on her German ears, and start putting down roots in her new home. During this event, she was then invited to church the following Sunday by a leader at the Mosaik Student event. Since Rebekah had not yet found a church to be a part of, she and her friend Laura decided to go.

From the first visit, New Life Church (NLC) seemed to be a place she could fit in well. The congregation was young, very diverse internationally, and the church itself was still fairly new. It didn’t take long to make friends there, certainly something she wanted to happen quickly after stepping foot into her new country. It was a ripe place to see individuals develop a vision for welcoming those around them, and Rebekah was able to play the catalyst.

Rebekah loves hosting people in her home. She loves bringing people together and connecting new people. She is also really good at it. So it was only a matter of time before she started hosting different get-togethers at her apartment, inviting her new friends from NLC and new friends from outside of church— many of them refugees— to spend time with one another. The purpose was not only to have fun with a lot of people, but to also connect those people from church to their refugee neighbors in a non-threatening, neutral environment. For Rebekah, it was a natural way to express God’s heart for all people in her own life and to model that for others.

“I just started embodying [welcoming internationals] and inviting church members into that,” Rebekah said, concerning her heart behind starting these gatherings.

She started seeing her NLC friends open up more socially through interacting in an atmosphere outside of their church building. One friend “used to be the quietest person at church,” but after a couple times at Rebekah’s home, she began to see his entire mindset shift on why he was even in Frankfurt in the first place. Instead of simply living his daily life of work and spending his free time doing whatever he wanted, he started being more service-minded and truly pursuing refugees at events to which Rebekah would take him. 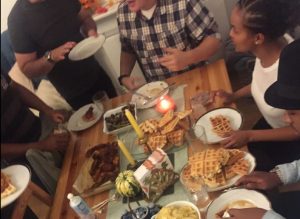 After hearing how the simple act of opening up her home had caused someone to open up with his life, Rebekah came to a profound realization.

“I didn’t think about how much whole-heartedly embodying welcoming in my home would get across to others that ‘This is also what I want you to do.’” But it did. And people started following what she had modeled for them.

One church member even told her, “Rebekah, I wouldn’t have said yes to you for any of this if I didn’t see you having already invited everybody in our church into that lifestyle that you’re asking us to start doing.”

“Rebekah, I wouldn’t have said yes to you for any of this if I didn’t see you having already invited everybody in our church into that lifestyle that you’re asking us to start doing.”

Continuing to cultivate these relationships over the following months led to an emotional goodbye as Laura, the friend who had gone to NLC that first time with Rebekah, moved to Greece, helping start a new ministry to refugee women in Lesvos. In March, Rebekah (naturally) hosted a party for Laura as a send-off for her journey to Greece. The conversation about possibly going to visit Laura in Greece came up a couple times with different people. After Laura came back to NLC in May and shared with the whole church about what she was doing there, others started becoming interested in actually making a trip to Lesvos and to the camp to help Laura’s work there.

Rebekah decided to make this vision actually happen, so she started asking the people who had already expressed their interest in taking a trip, promoting it as ‘a launching place’ for them to fuel their passion more for the unreached around them. God laid three specific women on her heart to ask. And all three said yes.

In mid-August, the four of them traveled to Lesvos, Greece, joined their friend Laura working in a women- and children-only refugee center and camp, and witnessed a glimpse of the experience many refugees have all around the world.

Moria camp, home to around 10,000 people in a quarter of a mile area, is packed with people housed in shipping containers, in tents, or just on blankets on the ground, with sewage running down the middle of the pathways between tents. One way Rebekah and her friends helped out at the camp was distributing food in the evenings. Roughly 300 women would line up to receive their portion for their families, and only about 200 would be served per day. Many of the women started lining up hours beforehand. These four women were surrounded by brokenness, insurmountable need, and trauma to the ‘nth degree. Rebekah said they were all sobered to know that their one week of “help” was nothing when looking at the plethora of needs before them, yet this experience of seeing such heartbreaking conditions, circumstances, and stories during their trip opened these four women’s eyes to the reality that many of the refugees whom they know in Germany have likely lived.

“All of us,” Rebekah says, “[were] feeling the burden to pray more because we now knew more— we need to be telling people back home so they could be praying more.” All four women shared this sentiment. The trip— and what they saw there— was a challenge for them to live more intentionally. Each one of them would likely say they had a heart for the nations before going to Greece, but now they had seen for themselves the heartbreaking conditions that millions of displaced peoples are living in all around the world.

For one woman, it motivated her to invite more people into prayer with her. So much so that she has started a regular meeting of believers centered around prayer for the nations. She now invites people from NLC, but also people from anywhere else, to join her. She has also stepped up as more of an ambassador in the church for prayer and for refugee ministry.

For another, who had been asking God for years “what He wants me to do with my life,” has a completely new perspective on her social work degree. It has given her the confidence and the drive to finish her degree and “see how God ultimately wants to use that.” And for the third, who currently works for a missions organization, has now been compelled to be a prayer warrior within her organization and to “help lead [my] organization into heavily making a difference with refugees.”

As Rebekah summed up her experience with putting this trip together, she shared, “It was humbling to know that, regardless if I led this trip well or not, that wouldn’t have been what makes them want to do anything when they come back. Yeah, I provided the opportunity, but they had to say yes, the Lord had to provide the funding… I wasn’t in control of anything that happened there. God was just like, ‘You know, you simply get to invite people into things and then pull back and see what I do.’”

“‘You simply get to invite people into things and then pull back and see what I do.’”

And arguably, that is the biggest role we play when it comes to working with God: inviting others to join what He is already doing, whether that be welcoming people in Germany, being a part of God changing lives in Greece, or influencing others to do the same.